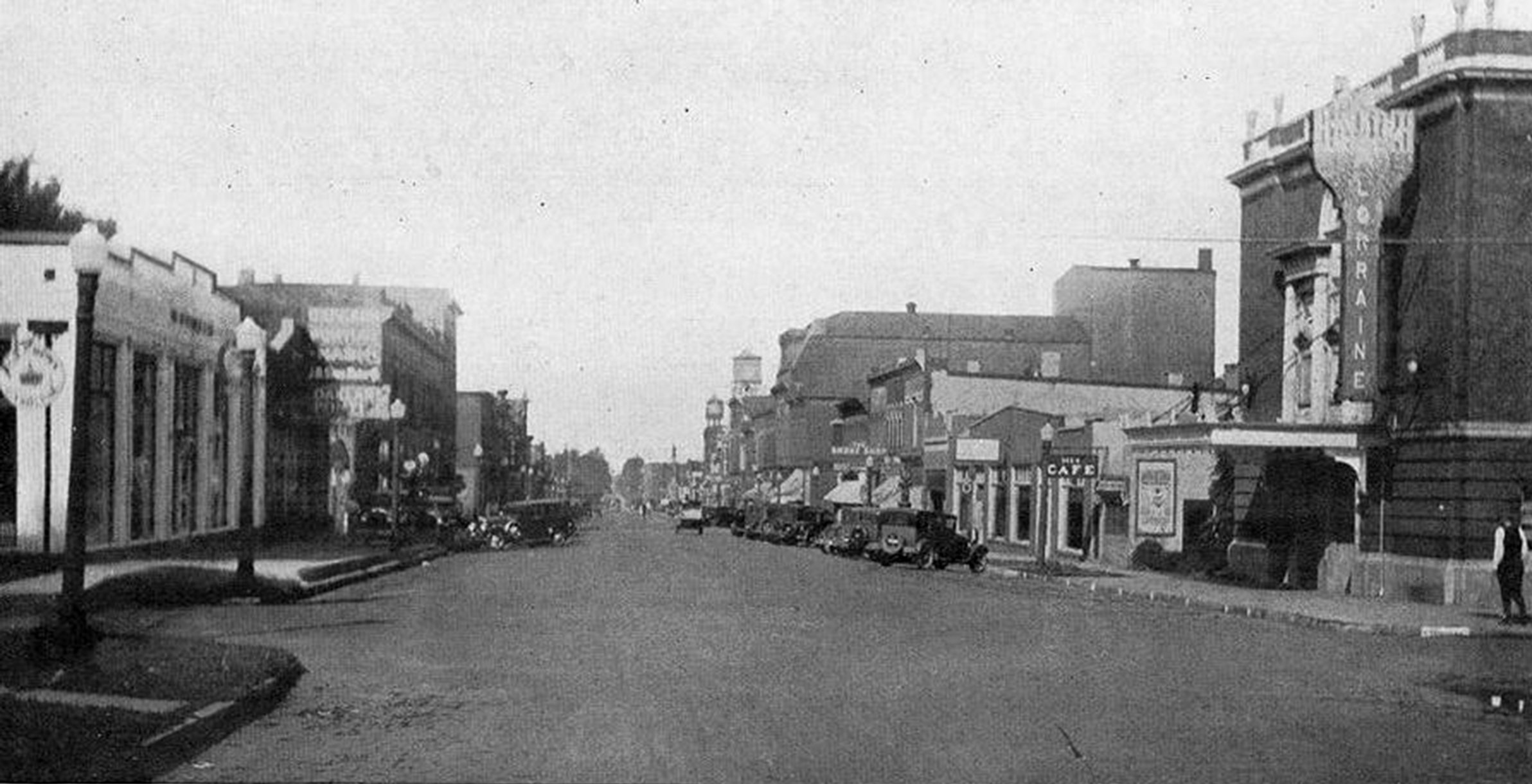 Hoopeston was laid out at the junction of two railroads, the Chicago, Danville and Vincennes Railroad (now C&EI) and the Lafayette and Bloomington Railroads (defunct).  Developers and businessmen saw the advantages the railroads presented and began laying out sections of Hoopeston to build a village.

Three small villages were marked off by three different individual groups.  The first village, Hoopeston, was comprised of 18 acres of land situated on the southeast corner of the railroad junction owned by Davis and Satterthewait. The second village, North Hoopeston, was laid out by the Thompson Brothers on the northeast section of the junction.  And the last village was laid out on the southwest corner of the railroad junction comprised of 160 acres of land which became known as Leeds owned by Snell, Taylor and Co., and a Mr. Mix.

Although 50 acres of the northwest corner were bought by two gentlemen by the name of Moore and Brown and ten acres by R. McCracken, those sections did not become a fourth village.  Plans by those three gentlemen were to convert the areas into additions to the town.

Hoopeston, named after Thomas Hoopes, who donated the land on which the railroads were built, was the name chosen for the new village. It was incorporated in 1874.  At that time, North Hoopeston and Leeds became additions as part of newly incorporated town.

The early history of Hoopeston since its beginnings in 1871, especially the parts that are no longer in existence, shows a way of life that revolved around downtown Hoopeston – Main, Penn and Market Streets, expanding the streets as the town grew.  Everything was downtown. 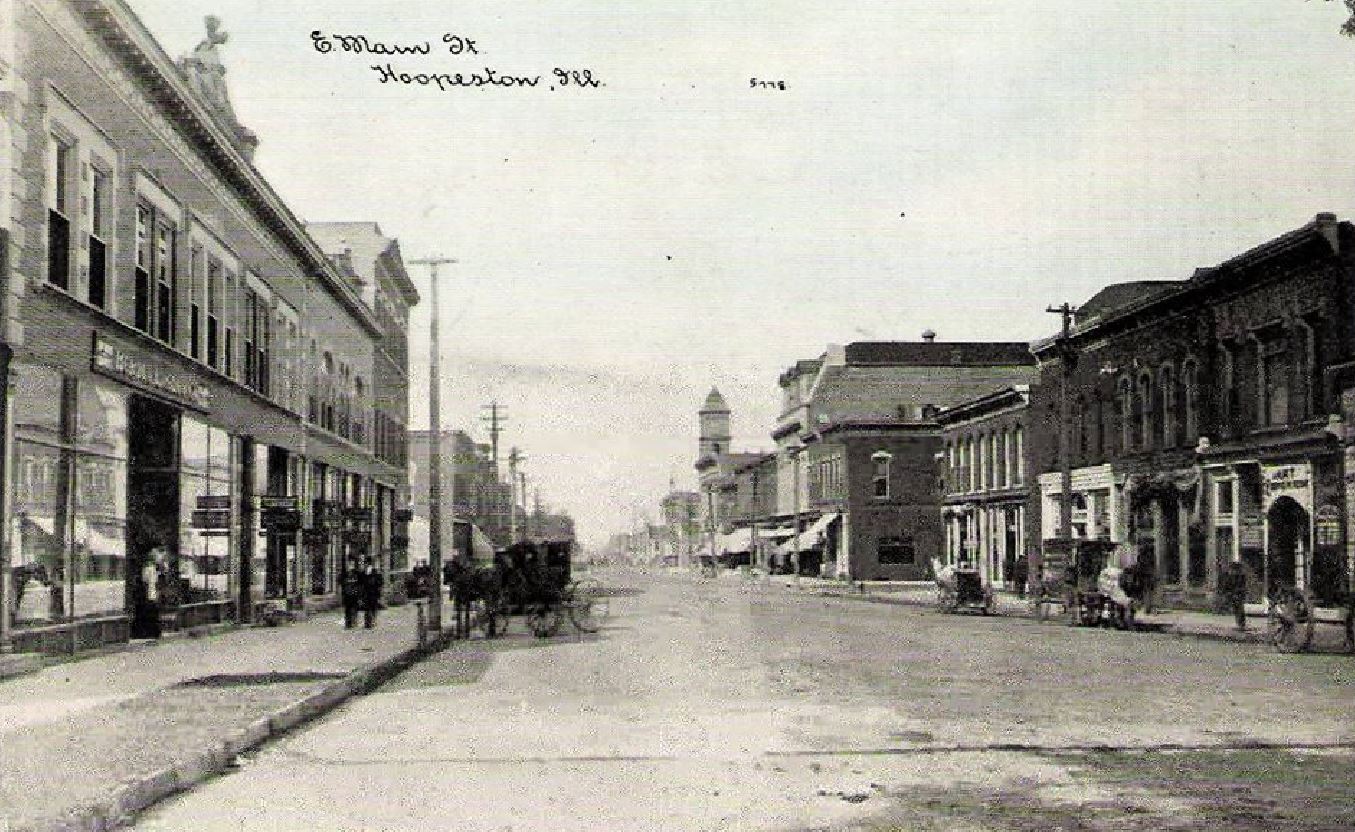 In fact, an early historical newspaper tells about a gateway erected at the corner of West Main Street and the Dixie Highway (Route 1) in 1924, just for the specific purpose of guiding drivers a mile east to downtown Hoopeston.  The Hoopeston Chamber of Commerce later decided it would be an even wiser idea to add lighting to the gateway and along the roadway leading to downtown Hoopeston which could guide travelers at night. 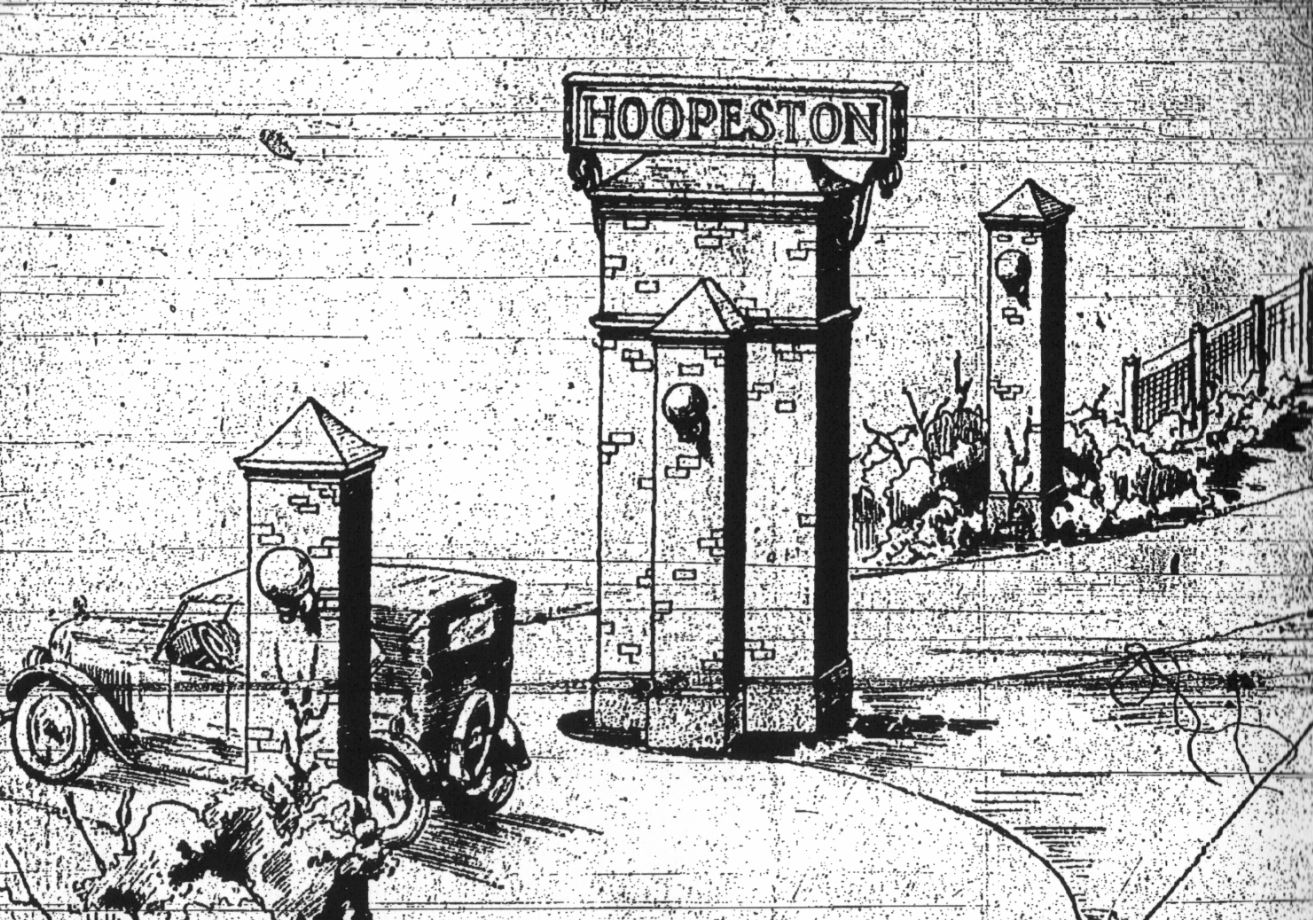 Hoopeston was a wealthy town in its early history and its name was bandied about in the New York newspapers on several occasions.  Once, in particular, when the Mayor of Hoopeston and its Aldermen decided not to accept pay for serving the city.

Hoopeston, nicknamed the “Holy City” or “White City,” supported more that thirteen churches of all denominations serving area residents.  It also became famous as a dry or “temperance” town in 1877.  No saloons were allowed in the city.  Hoopeston remained a dry community until the early 1940s.

As all towns grow, they develop growing pains.  For Hoopeston, some of the major growing pains were fires and the water supply to put out the fires.  Most early buildings were built of wood, heated with wood stoves and the cause of most fires.  Downtown Hoopeston burnt twice, nearly wiping out the area, however, the business owners rebuilt sturdier buildings.  As the fires happened, the town rebuilt using mortar and stone for safer buildings.  Once electricity and gas arrived, it eliminated the chance of fires.  It didn’t totally stop them, but it did cut down on the number of fires in the downtown area. 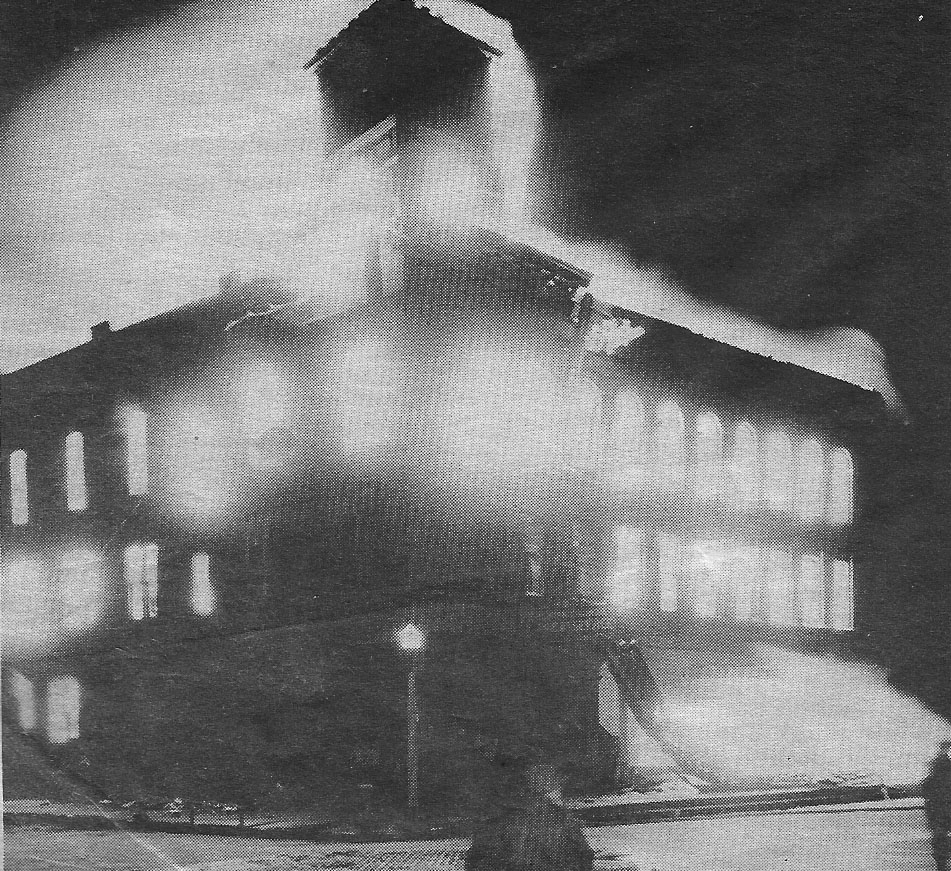 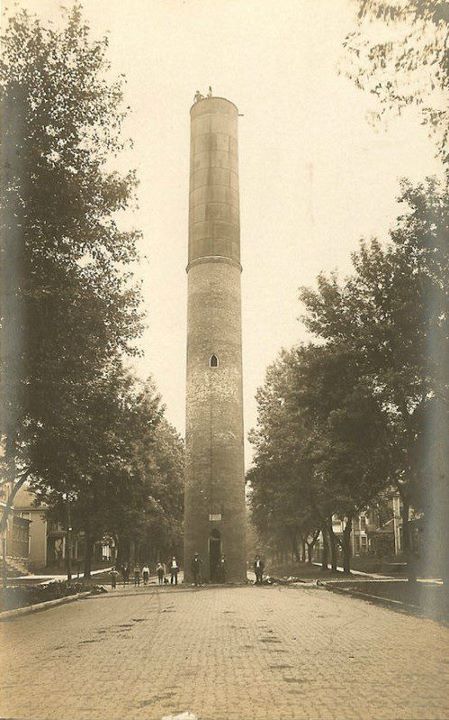 The problem of water was eventually solved with the addition of a larger water tower to replace the first one on at the end of East Main Street, a water works department, sewer and water system, and water mains.  The once dirt streets were bricked over, sidewalks added, a city hall was built on the corner of Davis (Seminary) and Market Street in 1888, and eventually telephone service was added as were several hotels, opera houses, nickelodeons, theaters and more to maintain the “good life” for the Hoopeston residents. 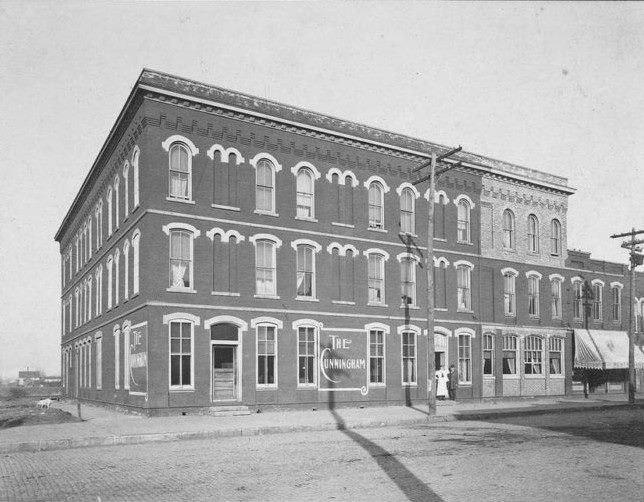 The town was also known to have an active Ku Klux Klan among the Hoopeston residents in the early 1920s.  The Klan not only held parades in downtown Hoopeston, according to early newspapers, but had rallies at McFerren Park in 1925-1926.

Canning factories were the mainstay of the town.  The Illinois Canning Company established by S.S. McCall in 1875, incorporated in 1877, became known as Joan of Arc.  Pillsbury bought the company next, putting it up for sale in 1995. It was at this time the employees banned together and bought the company renaming it Hoopeston Foods.  Teasdale Foods, a California based business, bought Hoopeston Foods in 2012.  It is still in production. 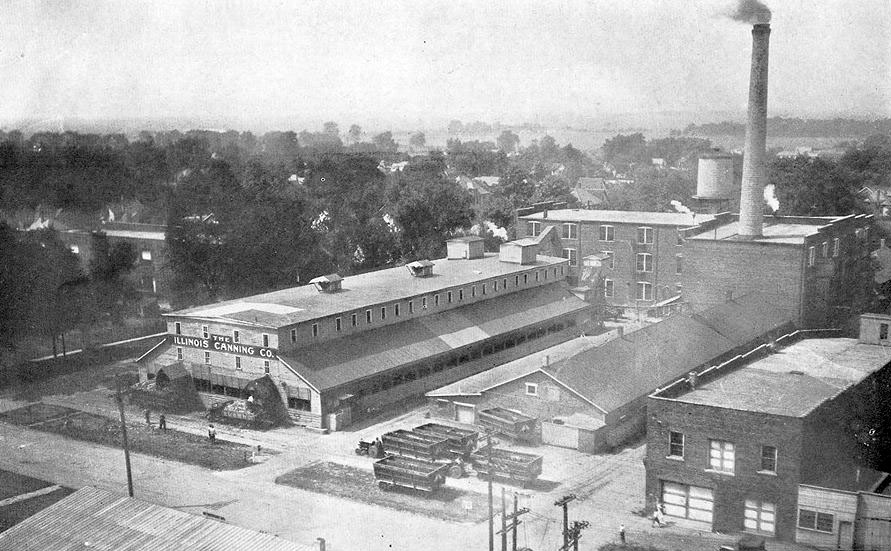 The Hoopeston Canning Company founded in 1876, which was sold to Stokely Van Camp, was later sold to Oconomowoc Canning Company.  Oconomowoc sold the business after a fire and rebuild to Chiquita Brands International who closed it in 1998. 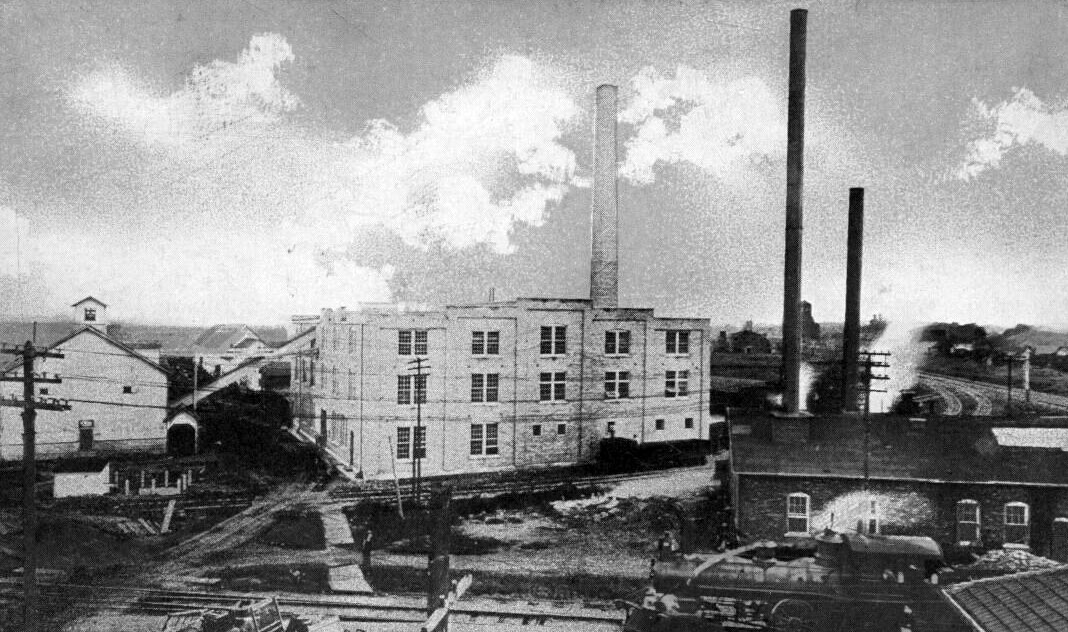 The Sprague Manufacturing Company was formed and built in 1897, renamed Sprague-Sells in 1923 when Ogden S. Sells bought it. In 1932, the plant became Food Machinery Corporation (FMC) and remained a viable manufacturing business until it was closed February 3, 2004.

All of these companies made Hoopeston a very self-sufficient little town. Equipment used in the canning industry was made at FMC, cans and lids were made at American Can Company and area farmers provided a lot of the product that was canned in the factories.

Hoopeston canning businesses developed a sweetcorn festival in 1940, to celebrate the end of harvest, by requesting canning and canning-related industries of Michigan, Minnesota, Nebraska, Ohio, Iowa, and Wisconsin to send young ladies to vie for a Hoopeston Sweetcorn Festival title.  The festival renamed The National Sweetcorn Festival in 1941, was discontinued shortly after 1941 due to World War II.  After the war, however, the Hoopeston Jaycees sponsored the event which is held at the end of August, beginning of September each year, Thursday thru Monday, ending on Labor Day.

Hoopeston also became the site of a German Prisoner of War camp during World War II, receiving its first compliment of 75 prisoners on April 26, 1944.  The camp was located in Hoopeston April -November 1944 and 1945 on Route 9 and Second Avenue to alleviate the shortage of young men leaving for military duty during harvest seasons.  Approximately 1,250 men were housed in this camp in 1944 and 1945. 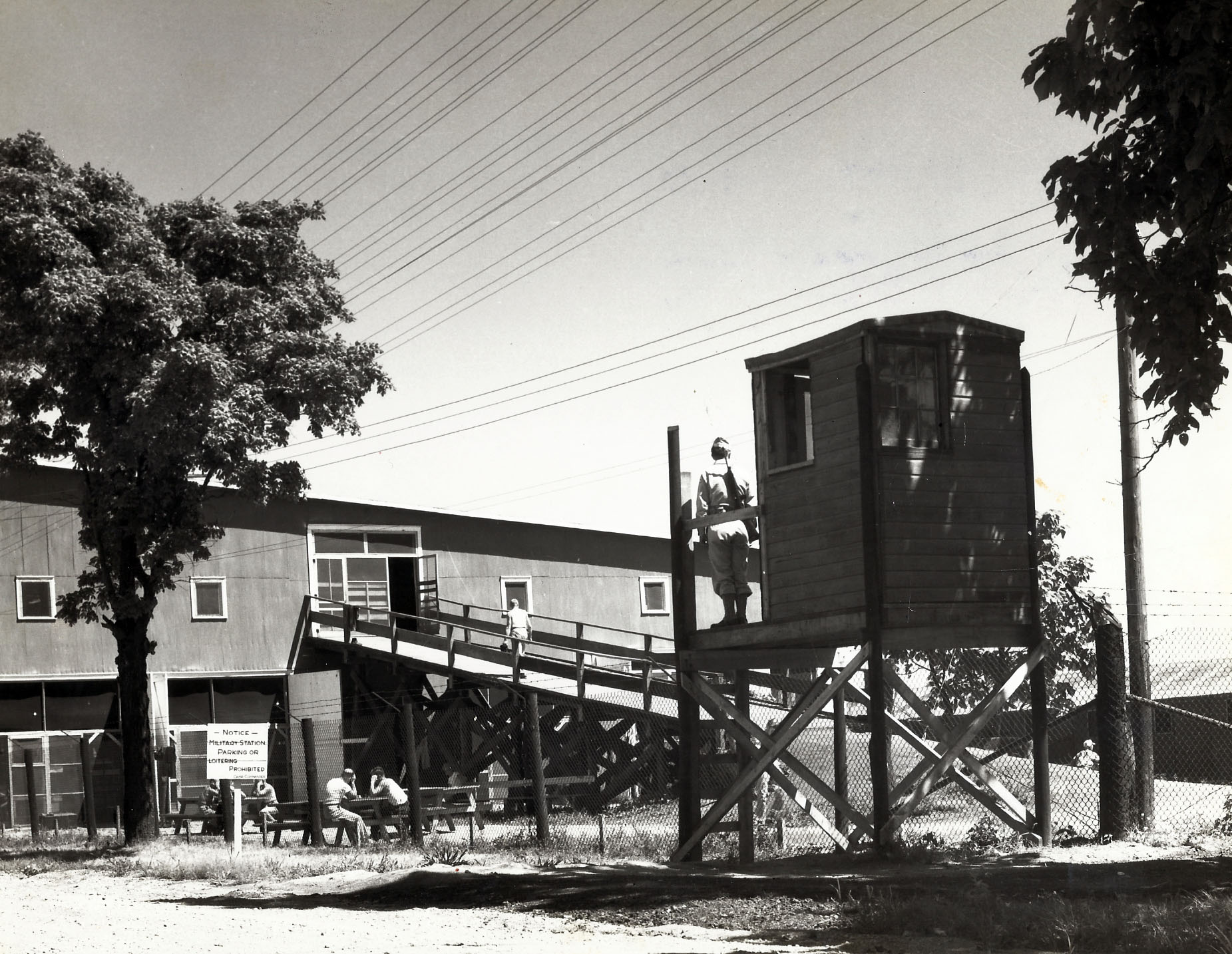 Hoopeston promoted and won the Danville Area Community College campus in 2012 which offers transferable credit courses as well as trade courses for everyone interested in learning a trade. Hoopeston’s first college, Greer College, however, was built in 1890, funded by a gift of $40,000 and 500 acres of land from John Greer, prominent business man of that time.  It closed in 1926 but remained a high school.

Read more about the city’s history on this digitized version of the 1925 publication “A History of Hoopeston“.